The majestic, flowing energy of the St. Lawrence

The majestic St.Lawrence River runs along the entire Charlevoix region from southwest to northeast. The presence of its calming and powerful energy flows through the towns, and its people, enhancing the already picturesque Charlevoix landscapes. Exceptionally beautiful and a source of well-being and rejuvenation for locals and tourists, it also brings a cool refreshing air during the summer season. Through its unique currents and tides, Canada’s most important commercial waterway, which is also a significant source of electrical power, brings with it many interesting facts.

As the largest river in Canada, its estuary, together with the Great Lakes, forms a hydrographic network within North America that extends over 3,058 kilometers. Originating in Lake Ontario and flowing from Kingston to Sept-Îles over a distance of 1,197 kilometers, it’s played a central role in the beginnings of Canadian history as the preferred route of explorers and original settlements along its banks.

Of all the major waterways crisscrossing the planet, the ‘river of great waters’ throws up  huge challenges for even the most experienced sailors. With exceptionally strong sea currents, tides of several meters, the presence of ice in winter as well its treacherous shoals, the St. Lawrence is regarded as one of the most difficult rivers to navigate in the world.

Young captains quickly learn that each journey is never the same, so over the distance of 480 kilometers between Les Escoumins and Montreal, navigation requires the assistance of seasoned sea dogs who know its many peculiarities inside out. Even with modern day boat design, navigation is never plain sailing so just imagine the skills that were required steering the vessels of Samuel de Champlain in the early 1600’s!

One of the reasons for Charlevoix’s abundant marine life is due to the saltwater’s transition to fresh water that occurs in a specific area stretching 112 kilometers from Baie-Sainte-Catherine, just a few kilometers upstream from Petite-Rivière-Saint-François. From the Gulf of St.Lawrence to Tadoussac, the water remains salty and in the Charlevoix region, it oscillates between moderately and slightly salty, so it qualifies as brackish water. In this region, the salt content is generally 30g per litre compared to 35g which is the average for seawater the world over. 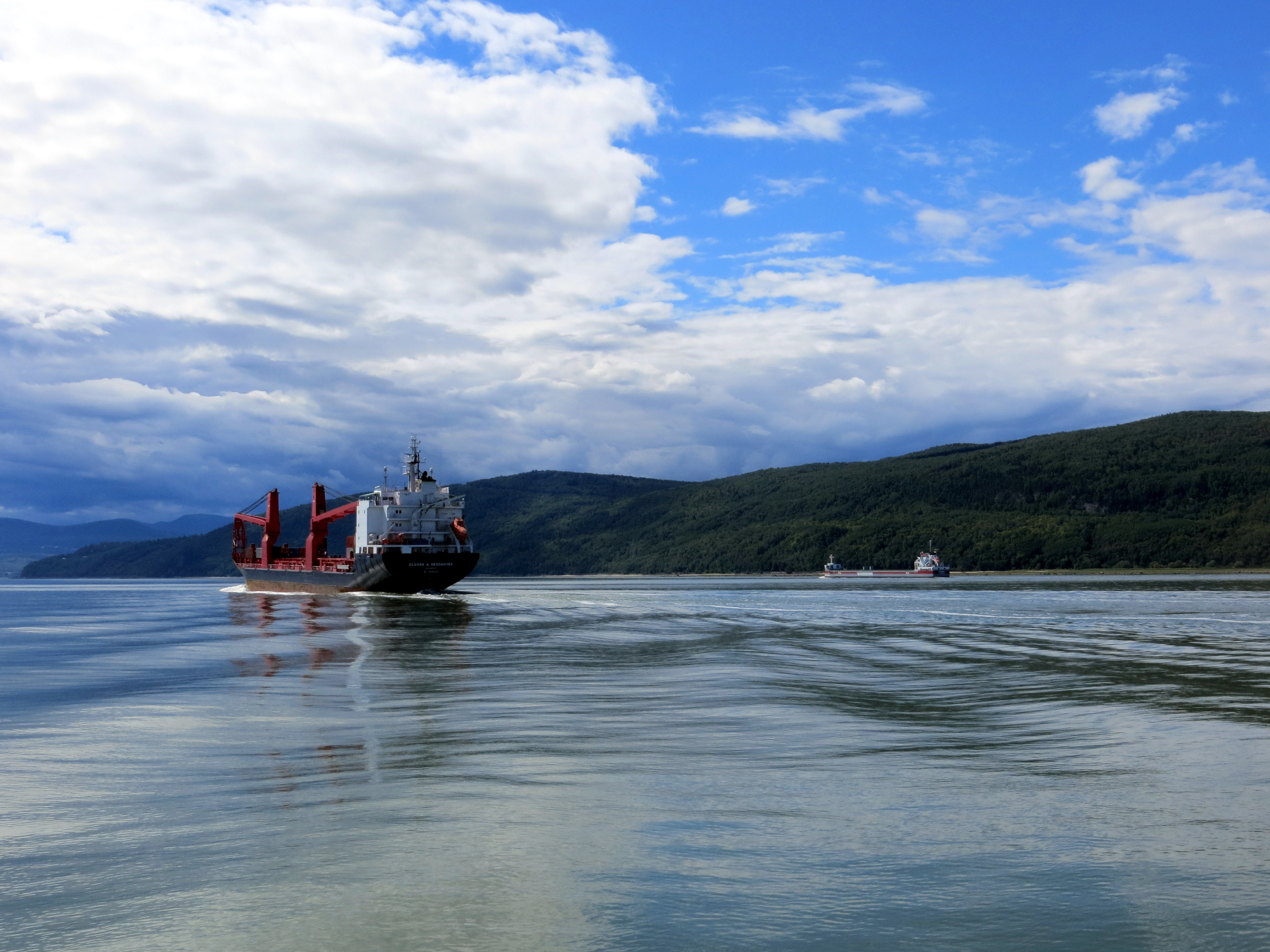 Across Charlevoix, it’s possible to observe semidiurnal tides – meaning the waters rise and fall not once, but twice a day. With each tide occurring every half day, the cycle of a tide, from its lowest level to its highest and back again to its lowest, takes a little more than 12 hours with an average delay of 50 minutes per day.

It’s in the Isle-aux-Coudres sector that the amplitude is greatest and where the currents caused by the tide are the strongest. Here, the amplitude can be up to 6.5 meters between low and high tides. As all tides are greatly influenced by the gravitational pull of the sun and the moon, the highest tides in the region, called ‘the Great Seas’ take place in spring during May and in fall during October.

Many visual markers are present on the river to help guide boats and facilitate navigation. The deeper waters are located on the North Shore side, which is the reason why boats sail near the Charlevoix coast. The region is equipped with navigation aids which are strategically located on certain capes, on shorelines and in shoals. The main lighthouses in Charlevoix are Haut-Fond Prince located at the mouth of the Saguenay River, those located on Cap-de-la-Tête-au-Chien and Cap-au-Saumon in the Saint-Siméon sector as well as on Isle-aux-Coudres.

The omnipresence of the St. Lawrence River in Charlevoix allows lovers of nautical activities to submerge themselves in a variety of fun and educational ways, including the observation and interpretation of mammals and marine environments, cruises, whale watching, sea kayaking, kitesurfing, fishing and more. However, before venturing into the waters of the St. Lawrence River, please arm yourself with all necessary navigational information and exercise great caution at all times. Various government sites, The Canadian Coast Guard and marina personnel are all reliable references, but you can also stop and ask residents for gems of local knowledge.

Throughout all four seasons, let the impressive energy of this beautiful expanse of blue wash over you as it vividly embellishes the landscape and creates lifelong memories. It remains today as in the past, as Jacques Cartier said, the “great river of Canada”.

Pride from grain to bottle

Nestled between the sea and the Charlevoix mountains, the Menaud distillery and brewery takes pride in celebrating its beautiful region.

Whether cruising the roads on your way to a whale-watching cruise, or taking a spontaneous trip looking for last-minute adventures, here are some of the memorable miles and smiles that stretch from La Malbaie to Baie-Sainte-Catherine.

From river to mountains, admire the splendour

Any opportunity to explore the country roads and routes in and around Charlevoix is worth it, either for a short look-about, a getaway of a few days or a longer stay.