An artistic journey through Baie-Saint-Paul

Art is everywhere in Charlevoix. Whether it’s expressing an emotion, an experience or a thought, art in all its forms wins everyone’s heart. Now, you can combine art with the joy of the great outdoors. This summer, plan an hour to take an artistic journey through Baie-Saint-Paul.

Located at 4 rue Ambroise-Fafard, the Carrefour culturel Paul-Médéric is the first stop to park your car and begin the tour. After arriving at this home of multidisciplinary dissemination, discover visual arts, performing arts, animation and history! The building is named in honour of Father Jean-Paul Tremblay – better known by his pen name, Paul Médéric – a priest and writer from the city. This is the ideal crossroads to contemplate and reflect on local cultural dynamics.

Next, a detour to the Place de l’Eglise is a must. From one season to another, this place hosts a variety of activities and cultural events. Whether you’re enjoying the famous Le Festif!, the Marché de Noël (Christmas Market) or the Symposium international d’art contemporain, Place de l’Église is the ideal spot for taking a break and admiring the heart of lively downtown Baie-Saint-Paul. Plus, the church opens its doors during the day for the Aux margins du silence (On the Edge of Silence) exhibition.

Head towards the Pont de la rivière du Gouffre for your next destination. The Gouffre River, which was once used to transport goods and people via rowboat, is symbolic because it crosses the entire city from the mountains down to the St. Lawrence River. Additionally, river tours by kayak and paddle board are now offered by Katabatik – Aventure dans Charlevoix.

Photography fan? The Pont des chars is the place to admire Baie-Saint-Paul from an entirely new perspective. From its location at 97 rue Saint-Joseph, you get a behind-the-scenes look at the city. This superb view features the Gouffre River, the church and the heart of the city, which is nestled in the cradle of the magnificent Charlevoix mountains.

Extend your journey by returning to downtown Baie-Saint-Paul. The charming rue Saint-Jean-Baptiste is well-known for its large collection of art galleries. With its festive look, you are immersed in a joyful, lively and dynamic atmosphere. Take this opportunity to visit the many art galleries, each one as fascinating as another: Beauchamp, Pierre-Gilles Martin and Carole Tanguay, Harmattan, Iris and Porte Rouge. 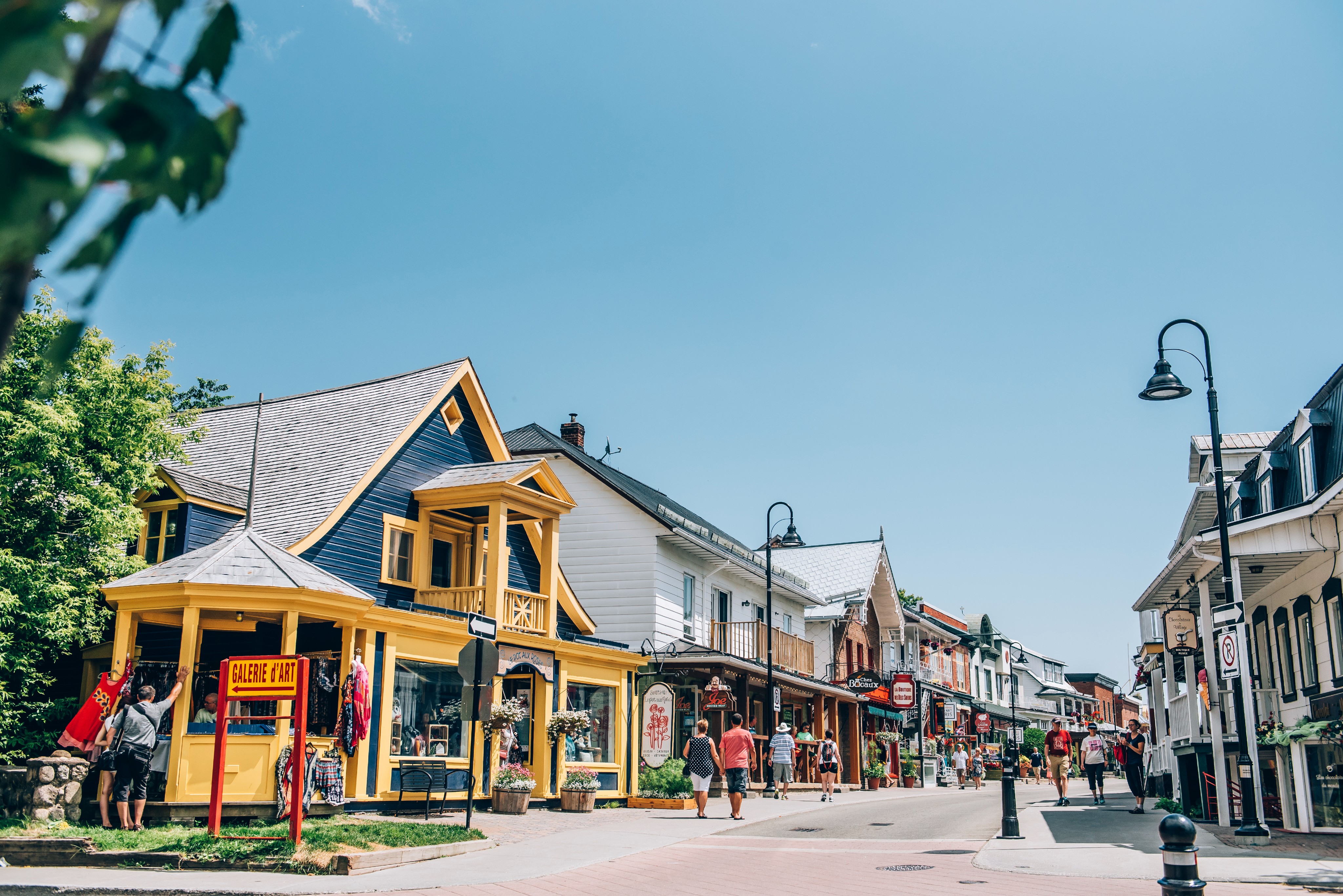 Continue your journey at 9 rue Forget. The Bibliothèque René-Richard (municipal library) is open to everyone and houses a breathtaking collection of books, artworks and temporary exhibitions. It’s a place to meet and exchange, and worth the detour because it also hosts the Charlevoix regional archives centre, where the area’s cultural pride is preserved.

The last stop on the tour is in front of the town hall at 15 rue Forget. Place du Citoyen proudly bears witness to the beginnings of the world-famous Cirque du Soleil. This is exactly where the ground-breaking company began its activities with the very first shows before eventually exploding on to the global stage. A beautiful sculpture erected for the Cirque’s 25th anniversary has marked the historic spot since 2009.

Your artistic journey promises stunning discoveries as you enjoy the great outdoors. For a more detailed guide through the itinerary, the Parcourir Charlevoix mobile app, which can be found in the Baie-Saint-Paul – Artistique et pittoresque section, is available for your smartphone and can help you to more deeply understand this incredible artistic journey.

Plan your stay in Charlevoix and take advantage of our partners’ many fascinating offers.

Discover all our offers

Soak up some culture via our museums, economuseums and interpretation centers

Across Charlevoix, waves of history and creativity of local artists and artisans flows through every town throughout the region. Step inside a variety of historical, modern and traditionally preserved establishments and discover their fascinating histories.

From river to mountains, admire the splendour

Any opportunity to explore the country roads and routes in and around Charlevoix is worth it, either for a short look-about, a getaway of a few days or a longer stay.

A few times a year, we all need a change of air. And what better way than to get it than taking in the salty sea breeze that blows over Isle-aux-Coudres. It was indeed such a reinvigorating breath of fresh air, we hope it inspires you to set foot on the island this summer and discover its breathtaking beauty for yourself.